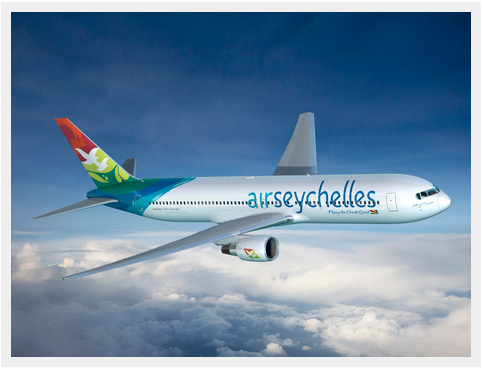 The two-class A330 will be configured with 18 flat-bed business class seats and 236 economy seats, in total 40 more seats than the Boeing 767-300ER it is replacing.  An A330-200 aircraft, leased specifically for Air Seychelles, is currently receiving a fresh coat of paint in the island carrier’s brightly-coloured livery and will come into service in mid-June.
Air Seychelles is operating an Etihad Airways A330 for international flights to Abu Dhabi and Johannesburg until its own A330 arrives next month. The twice-weekly Mauritius flights will be operated by an Etihad Airways A320.Cramer Ball, Air Seychelles Chief Executive Officer, said: “This is a milestone in our plans for Air Seychelles and an important next step in re-establishing our international presence. Tourism is booming in the island nation and there are an increasing number of visitors coming in from around the world, so by responding to this need for air traffic, we can both increase revenues and position Air Seychelles as a carrier of choice.”A second A330 will come on line in January, allowing the carrier to launch services to Beijing in early 2013.In January, Etihad Airways acquired a 40 per cent stake in Air Seychelles and the two airlines now operate eight return services a week between Abu Dhabi and the Indian Ocean archipelago – four by Air Seychelles and four by Etihad Airways.